The Riems construction site is making progress. However, more important than the initial excavation was the symbolic groundbreaking ceremony for the new building that will house research laboratories and quality control facilities. The representatives of government sent a clear signal of support for the site and its development. In attendance at this small ceremony were Chancellor Angela Merkel, the district representative for the German Bundestag, and Dr. Stefan Rudolph, State Secretary Mecklenburg-Western Pomerania Economy Ministry. Shareholders also showed their support for the expansion in Riems: Harmut Klocke and his sons Carsten Klocke and Stefan Klocke attended the groundbreaking. IDT intern provides a recap of the memorable occasion, complete with lots of photos.

„As IDT Biologika began its work in Riems on a rainy November morning one and a half years ago, this was the first expansion of our company outside of our site in Dessau, and we faced many uncertainties,“ said IDT CEO Ralf Pfirmann during his introduction of the Riems facility. „The fact that after one and a half years, we can celebrate an extensive expansion of this facility with a symbolic groundbreaking ceremony proves that this site has become a part of IDT’s dynamic development.“ The chief executive’s view could also be considered as a leitmotiv for the entire groundbreaking ceremony. Indeed, the many national and state politicians and Greifswald city officials were impressed by the site’s swift development.

Visit from the local member of the Bundestag

It also comes as no surprise that Chancellor Angela Merkel, the district representative for the Bundestag, showed her support for IDT by attending the ground breaking. The Chancellor’s visit required special preparations, especially for security. This symbolic act marking the site’s expansion sparked great interest in the media. TV channels with camera teams, photo reporters and news journalists converged upon Riems. Only the weather hesitated about whether to offer blue skies or dark rain clouds for the ceremony. But after a few drops of rain just before the start of the event, the sun decided to cooperate and shone across the site.

There was no mistaking the arrival of the most important guest. The Chancellor landed by helicopter on the Riems athletic field and was chauffeured in the black Chancellor limousine to the ceremony. Three shareholders and the management of IDT Biologika were waiting to welcome the Chancellor to the event tent. Inside, political representatives — including the local state parliament representative Egbert Liskow and the mayor of Greifswald, Dr. Arthur King — were treated to a VIP welcome and given a brief presentation on IDT’s activities.

After lively discussions, the guests of honor were led to the construction site and took their seats on the stage. As chief executive of IDT Biologika, Dr. Ralf Pfirmann welcomed the prominent guests and all the many visitors from business and politics, saying also how pleased he was that all IDT Riems employees could attend a ceremony that would set an important course for their workplace. 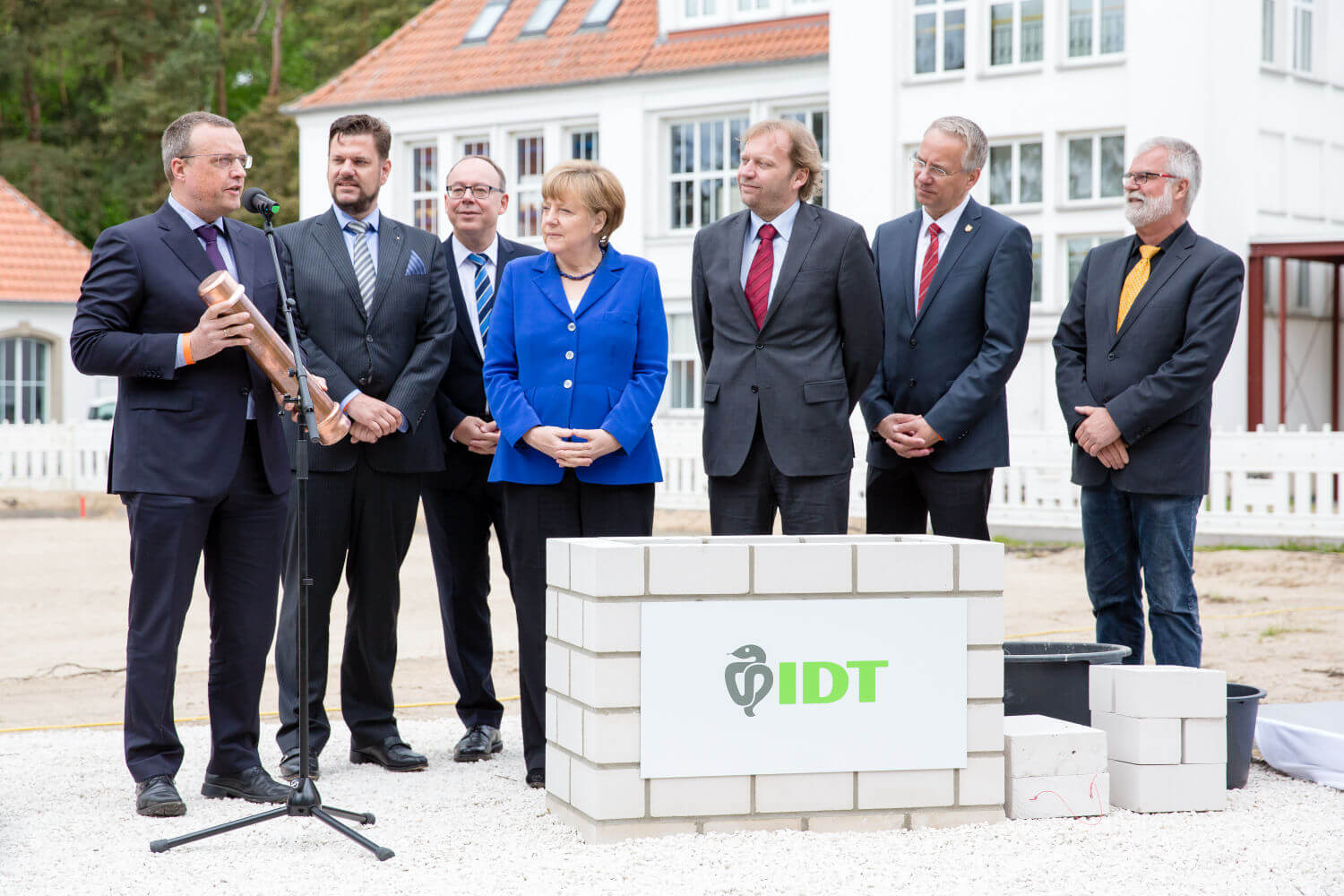 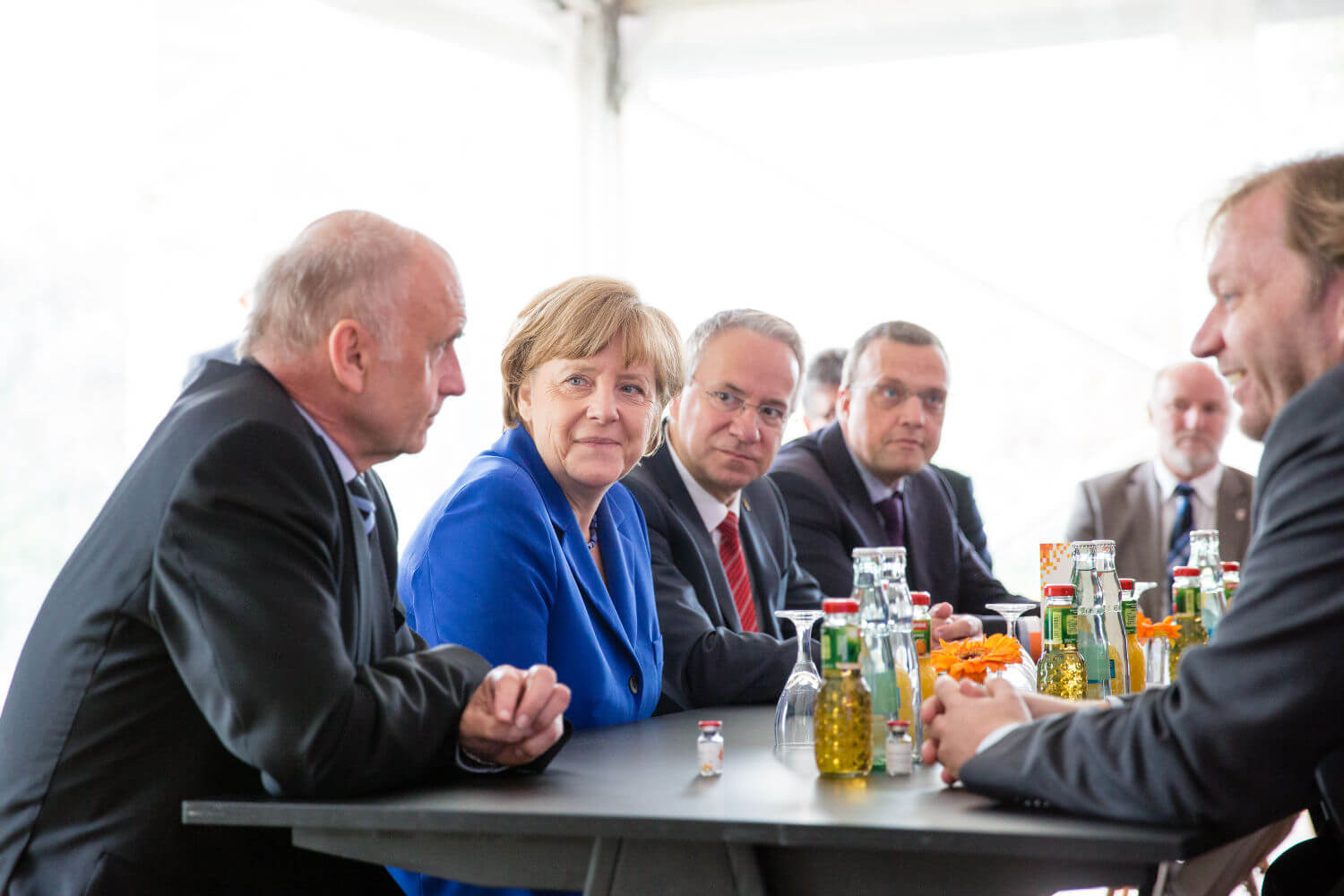 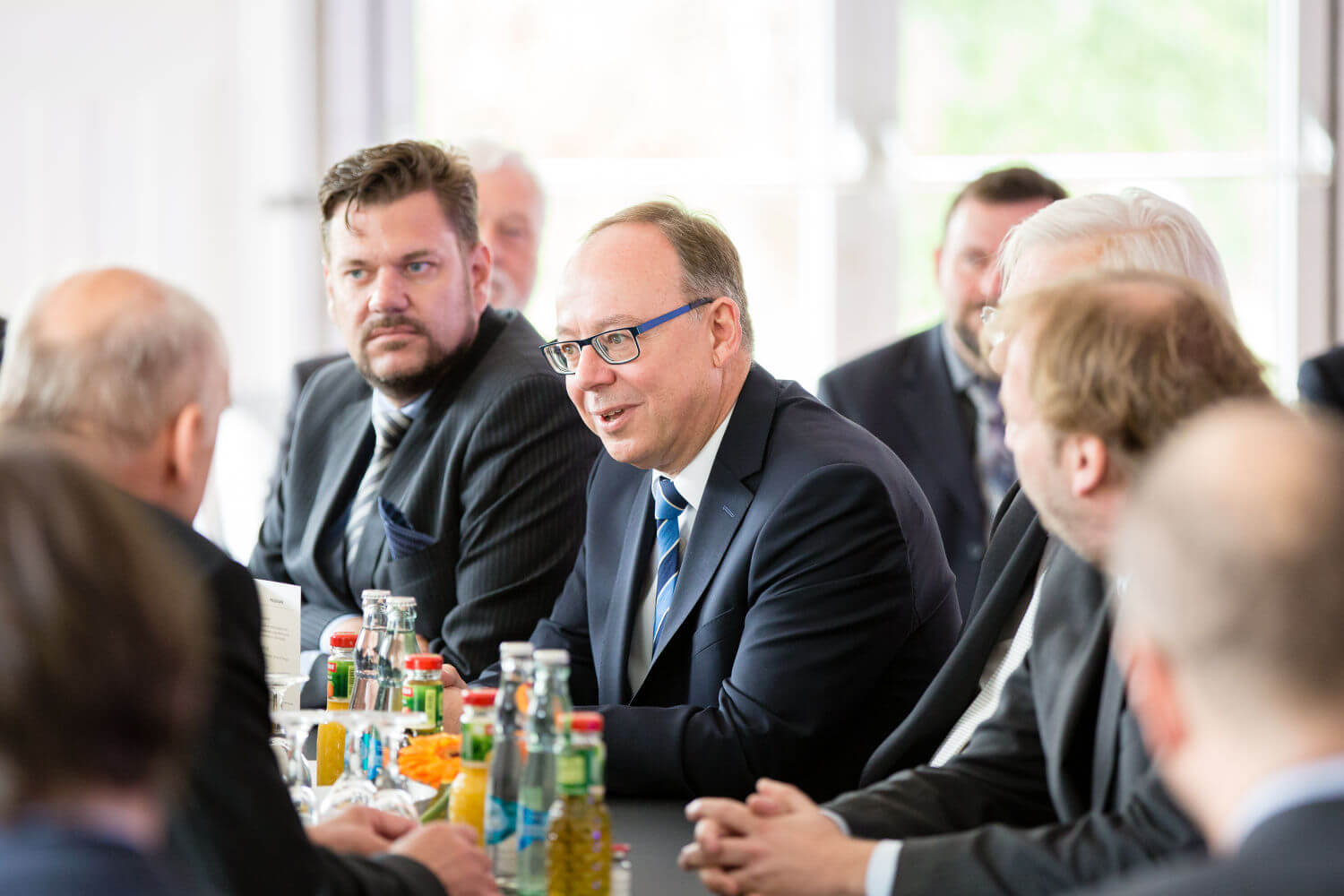 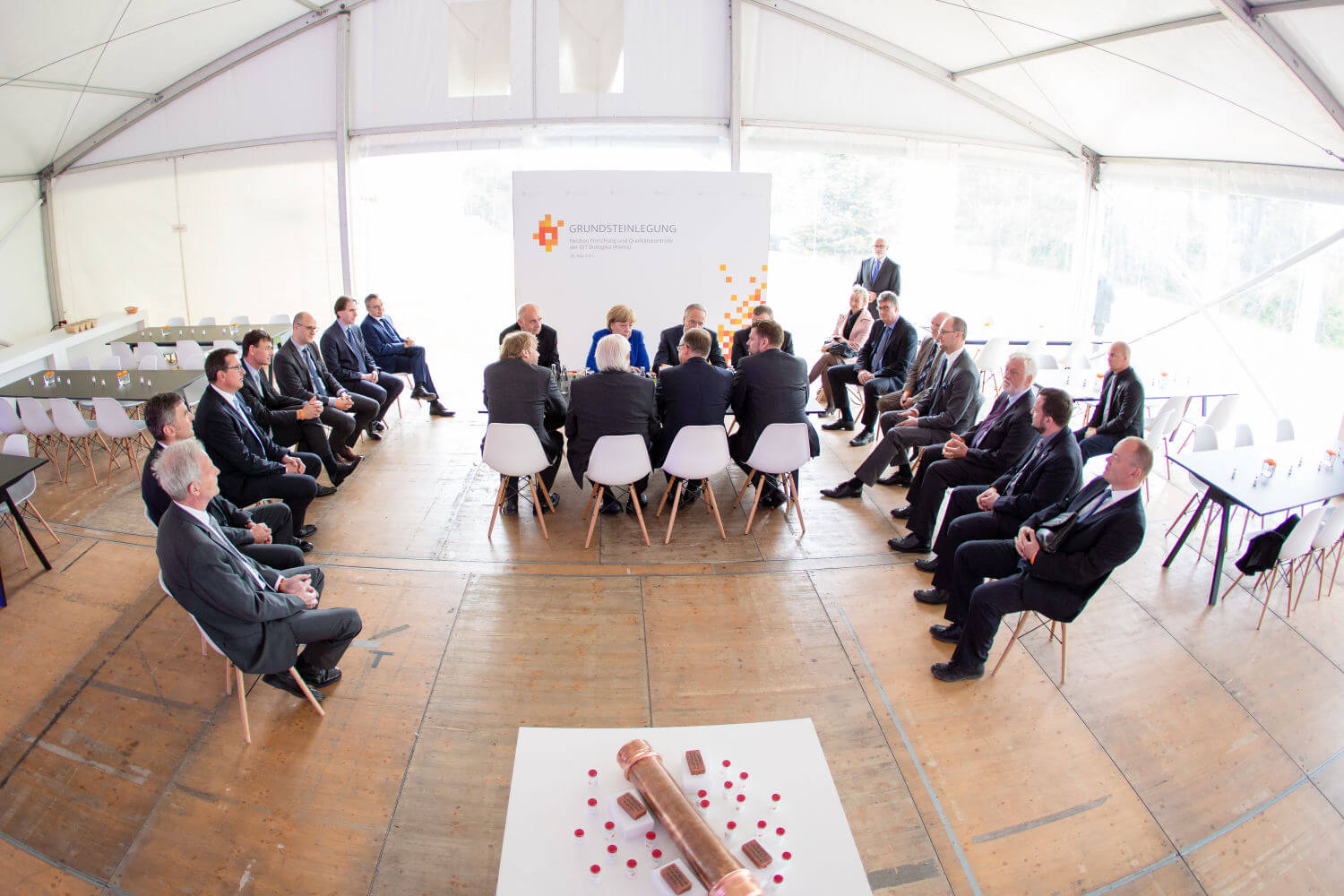 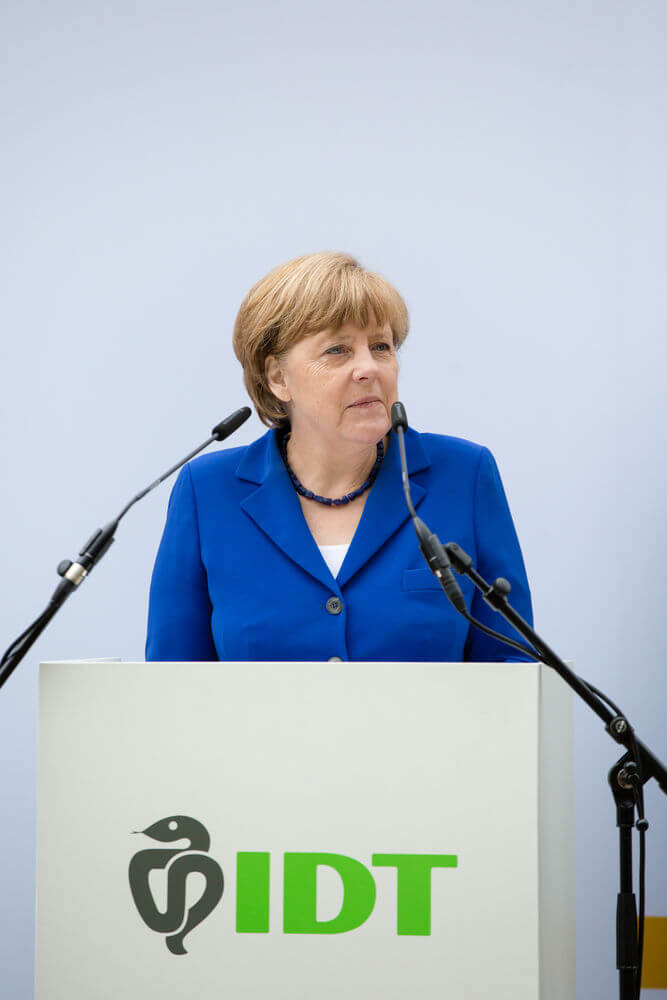 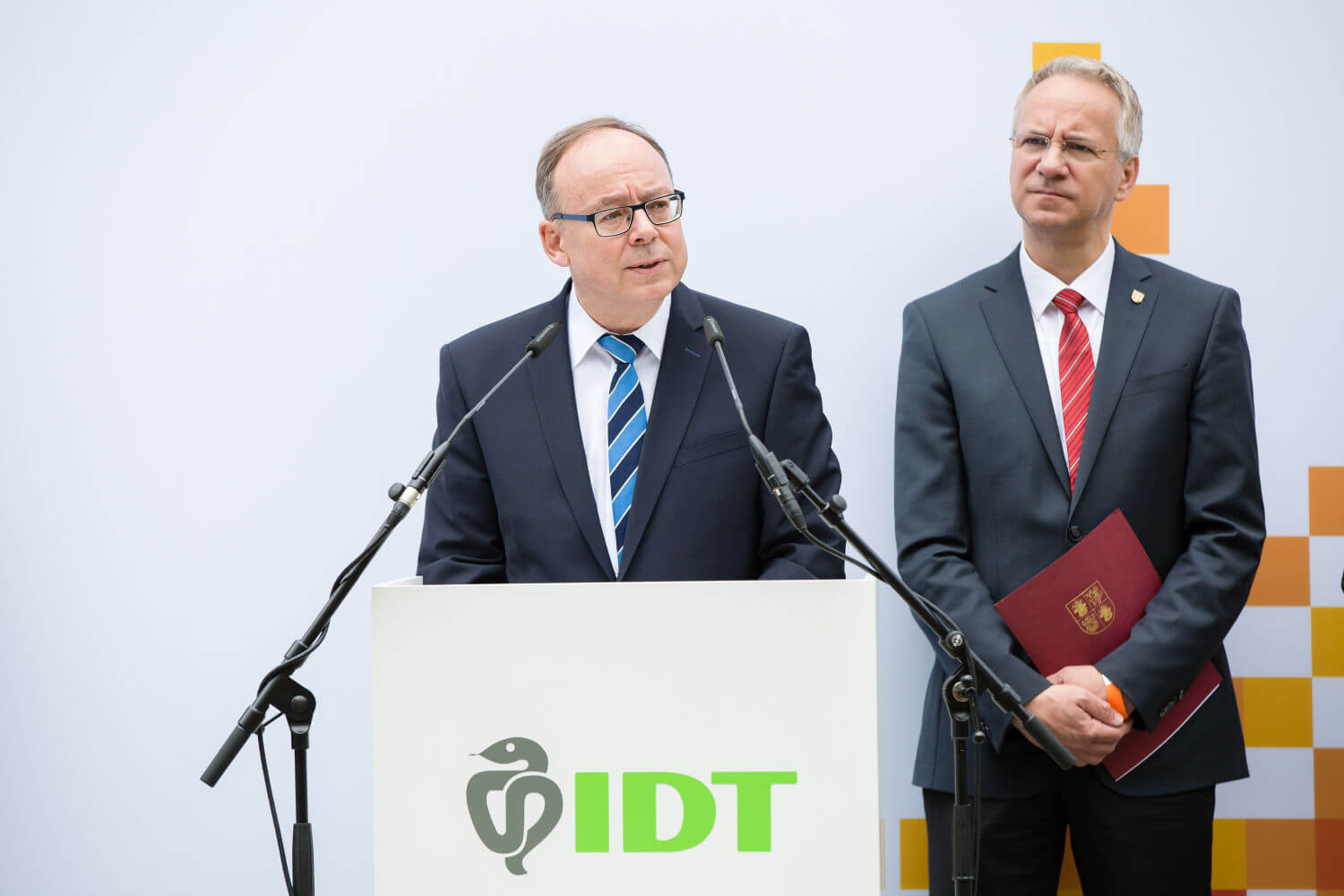 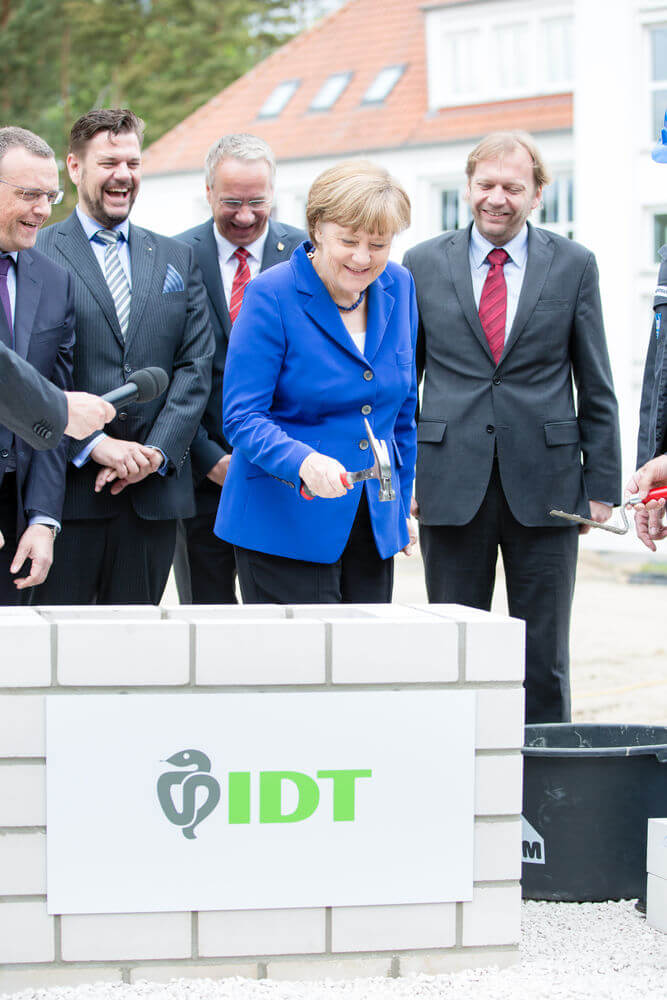 IDT, a role model for the region

Chancellor Angela Merkel called IDT one of the „hidden champions,“ a typical example of SME German companies and an important one. IDT would become a role model for her district and for the entire region in creating new jobs for research and high-tech production in the health sector. Dr. Stefan Rudolph, State Secretary of the Mecklenburg-Western Pomerania Economy Ministry, stressed that government support of IDT in Riems is also linked to the expectation that the Riems location create quality jobs in all fields by covering the entire value chain of a pharmaceutical company, from research and production to sales. Both Stefan Klocke, shareholder spokes-person, and the site’s architect Arndt Krug, made brief statements.

Then Dr. Ralf Pfirmann spoke at length about the significance of the new building and explained how the 27 new laboratories comprising a total of 1,800 square meters would create a structure for many new research projects and for employees in quality control.

Best wishes for the new building

The guests of honor assembled around the white-brick foundation as Dr. Jörg Köhler, Managing Director of IDT in Riems, listed what would be sealed in the copper time capsule: the current issue of the Ostsee-Zeitung newspaper, a description of the new building and some coins. With each brick laid upon the time capsule, management, shareholders and the dignitaries expressed their best wishes for the new construction, among them Chancellor Angela Merkel and State Secretary Dr. Rudolph.

While the VIPs posed for the cameras, hammers in hand, the other guests and employees made their way to the event tent to end the occasion with a festive lunch. As a parting gift, every guest received their own piece of the foundation: a small stone memento of a very important day in Riems for IDT Biologika.